By KAYLA GLEASON and LAUREN COFFEY

Thousands of people in Sarasota and Charlotte counties joined with others across the nation Saturday for the March for Our Lives.

A Port Charlotte High School student transferred from the Parkland high school just a week before the Valentine’s Day killings. He listened on the phone as his friends were in terror, his stepbrother told the crowd of 1,000-plus gathered at Gilchrist Park in Punta Gorda.

Jessie Sinitch took a deep breath before telling her story to the thousands in downtown Sarasota. She graduated from the Marjory Stoneman Douglas just under two years ago. Her sister is an English teacher at the school and was in the building when a former student killed 17 people on Feb. 14.

“She was in the exact building where the massacre happened and she directed her students to crawl under her desk,” said Sinitch, now a student at New College in Sarasota. “She hugged them and tried to keep them calm as a boy with an AR-15 was inches away from her front door. Brittany, you are my hero. You are stronger and more resilient and more fearless than I will ever be and I love you.”

For many, Parkland was just too close to home.

“I feel strongly about it as a student and as a Floridian,” said Sara White, a junior at Pineview High School in Osprey. “You have to ask ‘What if it’s me’ and when you get down to it, it affects me. The proximity (of the Parkland shooting) to me pushed me to get more involved.”

For three Venice High School juniors, the huge crowd that lined up and down Bayfront Drive shocked them.

“I think (the march) will cause people to think about (gun control), especially in Venice,” Gabi DeVries said. “It’s so conservative there; there’s like 13 members in the Democrat club and like 70 in the Republican club.”

Signs covering a number of requests dotted the greenery near the Unconditional Surrender statue in downtown Sarasota. The participants in the Saturday morning march all had differing hopes for what the march would accomplish in the future.

“I was 11 when Sandy Hook happened and my grandma said ‘You’ll never have to go through that.’ Then three hours away from me, this (Parkland shooting) happened,” said Jess Rhines, a senior at Lakewood Ranch High School. “This isn’t going to pass any new laws, but it will get the word out. The more people we convince that school shootings can’t happen, the better.”

“We had student speakers from all the different high schools in the area,” said Florida SouthWestern high school sophomore, Lianna Hubbard. “We’ve also had the support of Bryan Bouton, he’s been amazing with us.”

Bouton, a local teacher and president of the of the Charlotte Florida Education Association, credits the students for Saturday’s success.

They needed somebody who had organizing experience. I’ve basically sat in the background and given them little nudges here and there and helped steer them,” 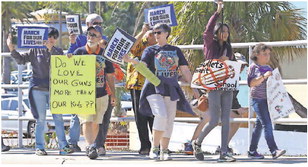 Above: Supporters carried signs to support the March of Our Lives in Charlotte County.

Thousands of people line the Bayfront Drive street during the Sarasota March for Our Lives on Saturday morning. 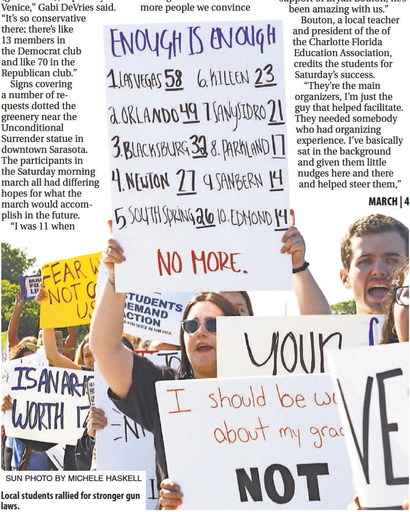