On the second anniversary of the Pulse Nightclub massacre Tuesday, student leader Lianna Hubbard and a dozen others “died” on the steps of the old Charlotte County Courthouse.

Hubbard, a homeschooled rising junior, along with supporters from groups like Indivisible Action Charlotte, All Rainbow and Allied Youth and Charlotte County Democrats, organized the “die-in” to advocate gun control, remember victims and call for change.

After a brief speech highlighting the ongoing battle for gun control, Hubbard counted down from five. On “one,” every protester silently laid in front of the building for 12 minutes. The goal was to make onlookers and lawmakers face what the aftermath of a mass shooting would look like, rather than just hearing about it and remaining relatively unattached.

“In a week, the news will 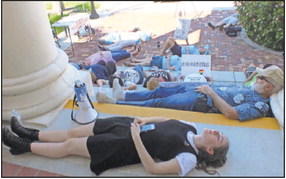 Lianna Hubbard joins her fellow protesters in “dying” on the steps of the old Charlotte County Courthouse.

make your killer famous; in a month, America will forget your name; in a lifetime, survivors will never recover,” Hubbard said, before taking her place face-up at the top of the courthouse stairs.

The participants surrounded 49 candles set up to honor each Pulse victim.

“There should be a thousand people here supporting this, that there isn’t shows part of the problem,” Jim Deeble said.

The Orlando shooting — and Tuesday’s protest — occurred on the 12th day of Pride Month, what is supposed to be a happy time when the LGBTQ community and their allies come together to celebrate and reflect.

“My pride is a protest because a celebration was turned into a rampage,” Hubbard said, rejecting the claim that movements such as the “die-in” are hijacking or appropriating Pride. “People had the hate in their hearts to blame the victims.”

Many attendees shared her sentiment, emphasizing how many gun violence issues in the country also concern intolerance or anger at marginalized groups.

“We have too easy access to semi-automatic weapons amid a climate in which sexism, racism and bigotry is tacitly approved. It is a fatal combination,” said protester Barbara Deeble.

Hubbard, who has been involved with similar events such as March for our Lives and the Marjory Stoneman Douglas memorial walkout, notes that anything that is being done is still not enough.

“Victims of gun violence have not gotten justice, whether or not their shooters have been convicted. This country would rather send thoughts and prayers when its citizens are living in fear and expecting a bullet around every corner,” she said.

Based on data from the Centers for Disease Control, an average of 96 Americans are shot and killed every day, a statistic Hubbard and other protesters are not only trying to bring awareness to but change. In 2016, Florida had a higher gun violence death rate than the national average — 12.6 for every 100,000 Floridians each year compared to 11.8 per 100,000 in the U.S., according to the CDC.

“If we do not stand up, we are colluding with the bearers of the guns. Losing that many people a day is intolerable and unacceptable,” said Elaine Lowry, a member of Indivisible Action who attended the protest with her longtime partner Ann Dixon.

The group’s position outside of the courthouse was meant to combat government inaction, according to Hubbard.

“Even though Rooney’s not running for reelection, there are five other local politicians who are and three of them continue to openly take money from the NRA. We’re here to show them that’s not acceptable,” said Hubbard.

According to the Federal Election Commission, Rooney has also received funding from the National Rifle Association in previous years — $2,000 in the 2016 election cycle. Since deciding not to run again, however, the congressman has openly supported proposals for enhanced school safety and secure infrastructure, such as those included in the 2018 Consolidated Appropriations Act.

In an effort to help turn the tide, a voter registration booth was also set up at the event, hoping to inspire more and more young people to get involved.

“I need to support our students. If there is ever going to be a change, it’s going to come from them, not us,” said Sushila Cherian. “They are our future.”

For news regarding upcoming events, visit fl17indivisible.com. Information on Florida Legislature can also be found at www.leg.state. fl.us. 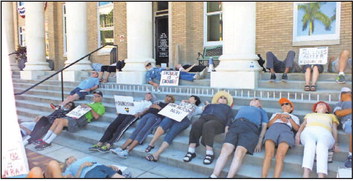 More than a dozen protesters symbolically died for 12 minutes on the courthouse steps in downtown Punta Gorda. 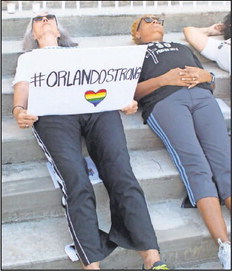 Between operating a voter registration booth, local activists lie down bearing signs remembering victims and survivors of the Orlando shooting.