Robert A. McDuffie is a convicted felon who collected 5,000 signatures from area residents for six months with the hope of voting again.

It wasn’t just for him, though.

More than 1 million felons in Florida would have their voting rights restored thanks to Amendment 4, as long as they completed “all terms of sentence including parole or probation,” according to the amendment.

But some lawmakers in Tallahassee have proposed bills to define a sentence far beyond time served behind bars.

The Voting Rights Restoration bills, or SB 7086 in the Florida Senate and HB 7089 in the Florida House of Representatives, defines completing the sentence as the parole and probation stated in the original amendment, along with fines, restitution and “any

“There’s 67 supervisors of elections across the state... We have got to give them some clear guidelines on who will be eligible and who will not be eligible to have their voting rights restored.” 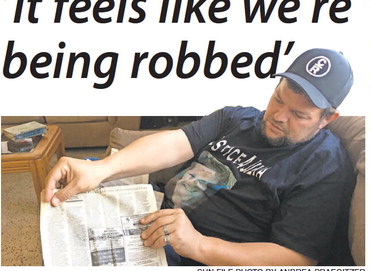 Robert A. McDuffie of Port Charlotte held up an opinion column published in the Sun in 2017 that he carried around while collecting signatures on petitions for a constitutional amendment to restore felon voting rights in Florida.