‘Tired of thoughts and prayers’

Punta Gorda became one of the first stops of the Florida March for Our Lives: Road to Change tour on Tuesday.

The national tour to promote voter registration and raise awareness on gun control was organized by students and alumni of Marjory Stoneman Douglas High School who, just a few months ago, lost 17 peers and teachers when an ex-student opened fire on the Parkland campus.

After countless marches, walkouts and protests across the country, students from MSDHS decided to use their summer to educate the public and attract young voters.

One such event planned for the Punta Gorda stop was a voter registration booth in Laishley Park.

“We want to throw a great event for the Parkland kids and make them feel welcome. But it’s really about getting people signed up and ready to vote,” said local student leader Lianna Hubbard.

Hemans added: “We want people to know how 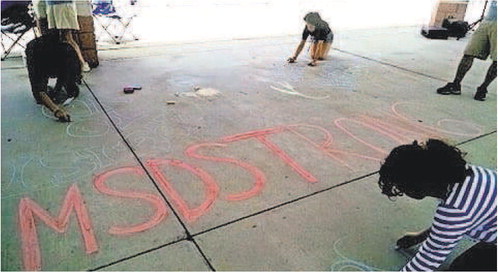 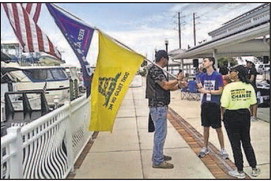 Showing their support for the students were Joan Fischer (left) and Margo Meyer, of Port Charlotte.

important their voices are. Every vote matters. Just one can make all the difference.”

Student organizers from both MSDHS and Charlotte County Public Schools teamed up to reach as many people in the area — especially young people — as possible.

Nearly a dozen Charlotte County students came out for the event, many having participated in earlier walkouts and marches, along with 30 to 50 adult supporters.

“It’s important to support them, it’s important for them to see us here,” said Port Charlotte High School senior Sabrina Salovitz. “They aren’t alone. This affects all of us so much. It’s so close to home.”

With only six short days to put the event together, many attendees said the turnout exceeded their expectations.

“I was surprised there was so much support here. On the bus, we were thinking it would be just a small group but this is fantastic, it’s so uplifting seeing everyone here and ready to make a difference,” Adam Alhanti, a rising senior at MDSHS, said.

One Parkland graduate, Daniel Williams, reported he had already registered two new voters in the five minutes he had been there.

The afternoon was not without conflict, however. At least one counter-protester yelled at the students and interrupted interviews while waving a flag bearing “TRUMP 2020.”

“You don’t speak for me. We are the NRA,” Gary Snow called as MSDHS students got off their tour bus.

He stood next to a large, nondescript black duffel bag labeled “NRA.”

“There’s been an overwhelming reception from both parties. This isn’t a partisan issue,” Williams said of encountering gun rights activists. “It affects everyone and lots of people recognize that. But, with all the positives, there are some negatives.”

Still, many of the students took time to speak with the counter-protesters — Snow and Alhanti eventually shook hands after what appeared to be a tense moment to onlookers. Williams noted that this type of cross-party civil discussion is exactly what Road to Change hopes to increase.

“We’re using the First Amendment, so are they. We share a common ground. They’re just sharing their voices like we are,” said Alhanti. “I guarantee if I asked ‘Would you want to stop school shootings,’ he would say yes.”

Hubbard shared a similar sentiment, “We actually seem to agree on quite a few things — the state of politics right now, student safety. You don’t have to vote red or blue, we just want you to vote orange.”

Orange is the color for gun violence prevention.

The Road to Change stop in Punta Gorda did not just begin and end with voter registration, either. To continue promoting bipartisan conversation and public education on gun control and reform, the student organizers scheduled a town hall meeting for Tuesday night at the Congregational United Church of Christ featuring local politicians, educators and law enforcement.

For more information on the Road to Change, visit marchforourlives. com/road-to-change. For those who were unable to attend, a video of the town hall meeting will be made available on Facebook, @marchforourlives.

“There’s been an overwhelming reception from both parties. This isn’t a partisan issue. It affects everyone and lots of people recognize that. But, with all the positives, there are some negatives.” 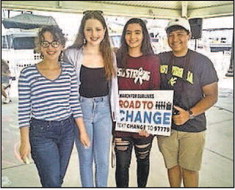 Shannah and Sabrina Salovitz, Iman Zaben and Vance Herbener of Port Charlotte High School came out Tuesday to support the Road to Change. 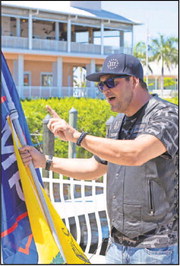 “Do you live with your parents? Who are you to tell me about my 2nd Amendment rights?” shouted gun rights protester Gary Snow at the March For Our Lives voter registration event. 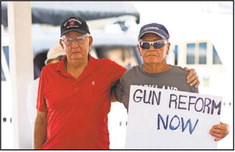 Tyra Hemans, a recent graduate of MSD, promotes the Road to Change tour at their Punta Gorda stop.

At the registration table, Kim Lastinger (left) sat with Rebecca Battagia and filled out their forms. 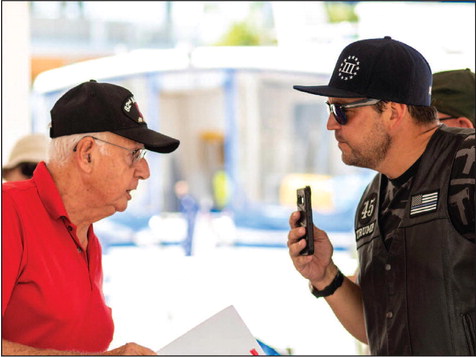 Air Force veteran David Lagg (left) confronted gun rights protester Gary Snow, saying, “I’ve been under fire, and so have these kids. I can’t imagine how you can stand under the (American) flag.”