Why some votes don’t count

Democratic candidate for U.S. Senate Bill Nelson is suing the Florida Secretary of State, demanding all provisional ballots and mail-in ballots are counted, despite issues regarding signature.

Of the 58 provisional ballots reviewed by the Canvassing Board in Charlotte County, only 14 were accepted and tabulated, and submitted to the state Thursday evening.

A provisional ballot is used during early voting and on election day to record a vote when there are questions about a voter’s eligibility. Reasons for a provisional ballot to be cast include: A voter being registered to vote elsewhere, no photo ID, or wrong address listed.

According to the Supervisor of Elections in Charlotte County, the time period for a voter to provide additional information to the Canvassing Board to satisfy a deficiency ended a couple days after the election at 5 p.m. Thursday.

“Although the Canvassing Board has the authority to consider other sources of information even if the voter doesn’t follow up,” said Supervisor of Elections Paul Stamoulis.

Assistant to the Supervisor of Elections, Lou Spacco said the canvassing board went through provisional ballots, and made decisions about which would be counted and which wouldn’t. The count was then passed on to the state. Once the state receives counts from all 67 districts, they will make the decision for a recount. 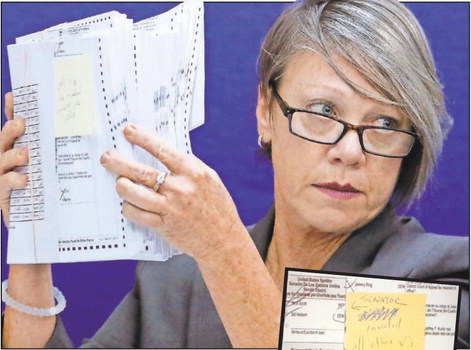 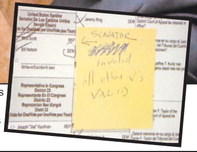 Betsy Benson, canvassing board chair holds ballots to be reviewed during a canvassing board meeting at the Broward County Supervisor of Elections office Friday. Right: A ballot is shown — the vote was ruled invalid.

The Sun asked Spacco how many vote-by-mail ballots were “thrown out” due to issues with signatures.

Spacco responded: “Do you have to put it that way ‘thrown out?’ It’s very disingenuous of you people. I’d say you’re fake news, but then you’d know where I’m from.”

Later, the Sun requested the information from Stamoulis, who provided the numbers upon request.

In Sarasota County, of the 435 provisional ballots that were cast, less than half were accepted, at 205. According to the Supervisor of Elections Office, reasons for ballots being rejected include: voters not being registered, voters who registered after voting, and some who have already voted elsewhere.

According to Sarasotavotes. com, a person casting a provisional ballot has the right to present written evidence supporting his or her eligibility to vote to the Supervisor of Elections by no later than 5 p.m. on the second day following an election.

The website also states information about whether your provisional ballot was counted in the final canvass of votes, and if not, the reasons why will be provided no later than 30 days following the election.

According to the Supervisor of Elections of Lee County’s website, 508 provisional ballots were cast.

The Sun submitted a public records request to receive the breakdown of how many provisional ballots were accepted, and how many mail ballots were rejected. The information was not immediately available.

According to Stamoulis, the first results out of Charlotte County were reported at 7:06 p.m. on Tuesday. From there, the SOE continued updating every 45 minutes or less until its final election night report was sent at 9:46 p.m., he said.

The Charlotte County results came in after the final count for Lee and Sarasota counties.

Stamoulis said the decision was made to not modernize the precinct results in Punta Gorda because of security concerns.

“Our clerks physically transport the sealed thumb drives from their polls to eliminate any possibility of internet interference. The results from our West County polls naturally take the longest and are brought in under police escort,” he said.

“Our focus is, and has always been, the security of the voting process, which is our paramount concern. I could care less how we fare in a contrived race to report results,” Stamoulis added.

No local candidate has submitted a request for recount at this time in Charlotte County.

“When all the counties in Florida have sent their final election night report, which some have not, the Secretary of State will determine which races require a recount and notify us accordingly,” said Stamoulis.

He added that the deadline for counties to report their results is noon today.

“The most common reason for an Election Day Provisional Ballot is no photo/signature ID,” Stamoulis said.

Rick Scott also filed a lawsuit Thursday — against Palm Beach and Broward counties — accusing officials there of trying to “steal the election.”