Do we want the wall?

About 100 protesters clustered on the streets of Punta Gorda Tuesday to declare their own emergency — President Trump.

A protest was held by Englewood Indivisible and Indivisible Action Southwest Florida in front of Rep. Greg Steube’s Punta Gorda office in the old courthouse building on Taylor Road. The event was to protest the immigration national emergency declared by President Donald Trump Feb. 15.

Indivisible is a national movement that began in January 2017 to “oppose the Trump agenda,” the group said in a statement. There are currently over 6,000 groups nationwide. 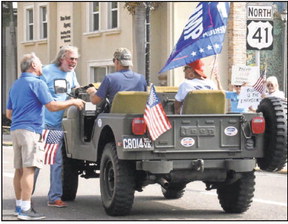 “They’re so mean,” Ed Farrell said after stopping in the middle of Taylor Road with Joanne Farrell protesting the anti-wall protest held by Engle- wood Indivisible. “If you’re standing up for something, you’d think they’d be positive,” Joanne added. “Trump people are never like that,” Ed said. Two Englewood Indivisible protesters went up to the car as they were stopped in the middle of the road while chanting into a megaphone “Build that wall.” The Punta Gorda Police Department arrived soon after

The two groups also delivered petitions to ask Steube to “vote for measures to mitigate red tide,” which received over 400 signatures, “to vote for common- sense gun legislation” and “to tell President Trump to stop calling the media ‘the enemy of the people.’” Among honks and thumbs-up, as well as opposing chants to “build the wall,” Jane Hunter, leader of Englewood Indivisible, gathered the petitions to prepare to deliver them to Steube’s office.

“We have a real concern,” she said, “it looks like we have a completely out of control president who is very cavalier about our system of government and our constitution and the whole fabric of our country which rests on it.”

“Congress needs to step up,” Hunter said, “instead Republicans are just sort of going along with everything Trump is doing and that’s a very scary, terrible thing.”

Hunter called the border wall a “dog whistle for racism” and a “terrible waste of money.”

Steube responded Tuesday afternoon with this statement: “The people of Florida and the American people want our southern border secured. They are tired of the drugs coming across the southern border that are killing their children, and they are tired of the flood of illegal immigrants displacing those that want to come here legally and lawfully seek the American dream. I support President Trump and his plan to secure our border and protect our children.”

In a recent poll online, the Sun asked readers if they thought building the border wall is a national emergency. Thirty-nine people voted yes, while 38 people voted no.

During the protest, Ed and Joanne Farrell drove in their jeep, waving a massive navy blue Trump flag and a cutout of Trump’s face, chanting in a megaphone “build that wall.”

“They’re so mean,” Ed Farrell said about the protesters, who weren’t too happy to see them.

“If they can have their views, we should be able to have our views,” said South Dakota resident Bob Ellsworth, who came up to tell Farrell he supported his views.

“We believe in the wall,” Ed Farrell said. “You have a wall around your house, you don’t just let anyone in.”

Meanwhile Vietnam veteran and protester Robby Robinson thought the Farrells’ methods of protesting weren’t nice either. “It’s so hateful,” Robinson said. “They have that right (to protest), we have that right,” he said, “we’re a loving country.”

Among the commotion was a tiny table of chilled water bottles and candy canes from the Charlotte County Supervisor of Elections office, which is also located at the old courthouse.

“Our office believes in every American’s right to free speech,” said Charlotte County Supervisor of Elections Paul Stamoulis. “The alternative to resolving our differences with words is too scary to contemplate.”

Punta Gorda Police Department were dispatched after receiving a call at 11:47 a.m.

complaining about the noise and car horns related to the protest.

“The officers just went out there to ensure that everyone was safe,” said PGPD spokesperson Lt. Dylan Renz.

Englewood resident Jean Ranallo called the wall a “violation” and the wall would harm the natural environment. 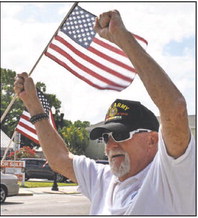 “It’s so divisive,” he said. With his wive’s parents having not entered the country legally, “my wife and grandkids would have to go back,” he said.

“Everybody comes from someplace.”